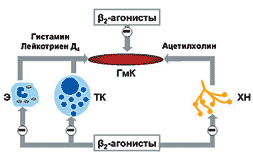 β2-agonists are drugs that selectively activate β2-adrenergic receptors and are used to treat asthma and other lung diseases.

The activity of these Substances promotes relaxation of smooth muscles, causing bronchodilation and muscles and other internal organs.

The development of substances with selective activity against β2-receptors was necessary to reduce the side effects of asthma treatment, in fact, selectivity for these receptors reduces cardiac effects and maintains high activity of bronchial smooth muscles, which relaxes and improves breathing.

β2-agonists are found in tablets or inhalers that can be used to treat asthma and allergies, including side effects caused by these substances include insomnia, anxiety, agitation, tremors, tachycardia, pulmonary edema, migraines. 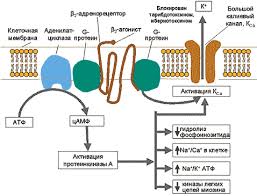 These drugs can be divided into 3 categories depending on the duration of action, in fact we have:

Activation of β2-receptors, as well as promoting relaxation of the bronchial muscles, improving breathing, cause relaxation of the entire smooth muscle, therefore also the vascular muscle, coronary artery and internal organs. Relaxation of the blood vessels increases the blood supply to the heart and skeletal muscles, thereby increasing their capacity. Consequently, the muscles and heart are more oxygenated and can support greater effort. In addition, β2 receptors promote skeletal muscle glycolysis, improving its ability to generate energy.

The activation of β2 receptors in muscle tissue also increases the force of contraction, as it increases the intensity of the nerve discharge during muscle contraction, thereby creating a greater action potential responsible for the force that the muscle is able to generate.

Some studies show that oral administration of β2-agonists, in particular clenbuterol, leads to increased muscle wasting. In fact, some of these compounds are currently used in some countries as anabolic agents in animal husbandry to accelerate the growth of livestock.

The action of these substances allows the maintenance of muscle activity for longer, which reduces the degree of fatigue, since the activation of the aforementioned receptors makes muscle cells more excitable and thus helps maintain endurance.

Increased ventilation and partial cardiac activity Chronotropic and inotropic, induced by β2-agonists, can improve oxygenation of muscle and heart cells, thus improving performance, especially in endurance sports, increased glycolysis also contributes to the athlete’s ability, while increasing the ability to generate muscle strength. increases performance in strength sports. In addition, muscle trophism can also help athletes. For these reasons, anti-β2-agonist drugs are used by athletes and are included on the Prohibited List.

It should be added, however, that not all studies carried out with scientific rigor have actually shown the ergogenic effect of these substances, therefore the question of the appropriateness or prohibition of athletes using these substances is still being discussed in the scientific community. According to current knowledge, it seems that therapeutic doses do not have a significant effect, while significantly higher doses have a real ergogenic effect in terms of strength and resistance to fatigue. For all of these reasons, it is clear that an athlete may be tempted to take these products inappropriately and in high dosages, with an increased risk of side effects, even if there is still no absolute certainty about their effectiveness. So much so that there are many cases of anti-doping positivity for β2-agonists, in most cases clearly justified by suspected asthmatic or allergic diseases of various types, therefore the Olympic Committee also carries a specific risk of abuse, the use of these substances is prohibited.

Another reason why the Olympic Committee decided to ban β2-agonists was the discovery that some of these substances, in particular clenbuterol, have anabolic and slimming properties, therefore, their use will be beneficial for athletes. For weight loss we recommend https://steroide24.com/shop/peptidpraparate/abnehmen-tabletten.