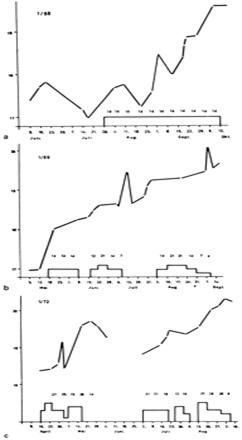 Testolactone is a testosterone-derived steroid used to treat breast cancer. The main function of this steroid is its ability to block aromatase, thereby lowering estrogen levels and inhibiting the growth of estrogen-mediated breast cancer. This substance in humans increases the level of testosterone, LH and FSH, since testosterone is not converted and, therefore, remains as such in the bloodstream, also a lack of estrogen activates the HPTA axis, which includes an increase in LH and testosterone, for this reason, testolactone has anabolic properties, although and lower than most other steroids.

The use of this steroid does not cause side effects such as water retention and gynecomastia, as it blocks the production of estrogen and the anabolic effect is dictated by the ability to increase circulating testosterone levels.

Athletes often use this compound in combination with other steroids, in particular testosterone, as testolactone reduces estrogen production and therefore may reduce the side effects of other exogenous hormones.

Tetrahydrogestrinone is a steroid created in recent years with the specific intention of improving athletic performance, in fact it caused a scandal when several elite athletes positive for it were discovered after a special detection test was discovered. This event suggests that before the test was created, many athletes used it with impunity without being detected.

Being a newly synthesized molecule, there is little information about its properties., in fact, neither the detection time nor the duration of action is known yet, but it has a very strong affinity for the androgen receptor (more than DHT) and, appears to have anabolic activity greater than DHT, with about 20% androgenic activity.

Tetrahydrogestrinone can be considered designer steroids created by modifying the gestrinone molecule. This substance has androgenic and progestogenic activity and low estrogenic activity, such as nandrolone, but with a much higher binding strength for the androgenic eprogestin receptors, so it should be conditional, as there is no data to prove it, have the same side effects of nandrolone, but much more pronounced, therefore suppression of the HPTA axis, gynecomastia, etc.

How THG is used by athletes is not very clear, even if it appears to have been taken at a dose of 5/15 mg per day in the form of sublingual drops. The lack of availability of information stems from the fact that until a few years ago it was a substance for the exclusive use of elite athletes who were the few who could find it, and it is clear that they never claimed to use it, with the result that they do not know like consumption.

Trenbolone is an injectable veterinary steroid not sold in Italy, used for raising livestock, with very high anabolic properties. It is esterified with various molecules that alter the release time.

This substance is especially active from both anabolic and androgenic points of view, in fact, its A: A ratio is considered 300-500: 300-500, its binding to the androgen receptor is much stronger than that of testosterone. For this reason, athletes find trenbolone a steroid particularly effective in promoting muscle growth, promoting lipolysis, and increasing strength. In addition, it seems that the muscle gain gained with this substance is more stable even at the end of the cycle, as trenbolone appears to be able to activate the proliferation and differentiation of satellite muscle fibers, a kind of reserve of muscle stem cells that are activated by this steroid and become new muscle cells, it also appears to be able to reduce the effects of cortisol by blocking glucocorticoid receptors.

Trenbolone’s incredible activity is partly due to the fact that this substance promotes the production of other hormonal anabolic drugs such as IGF-1 in muscle tissue. The validity of these data is supported by the fact that trenbolone gives a clearly positive nitrogen balance. In addition, trenbolone promotes the production of red blood cells, creatine phosphate in the muscles and increases the rate of glycogen recharge, significantly improving recovery from any physical activity.

Trenbolone is not aromatized, it is not limited to DHT, therefore it causes poor water retention, it inhibits the HPTA axis to a lesser extent than testosterone, however it is highly hepatotoxic and nephrotoxic, has a moderate progestin activity, and due to its high androgenic activity it promotes prostatic hypertrophy glands, hair loss, hypertension, acne, and also seem to cause mood swings.

It is obvious that such a powerful drug is used by athletes to increase muscle mass and strength. Typically used doses are between 75 and 500 mg per week and can be found in urine for up to 5 months after the last dose, with several cases over the years of anti-doping positivity.

According to some zootechnical studies, trenbolone appears to be more effective in increasing estrogen-related muscle growth, which is why athletes often associate it with testosterone, which is then converted to estrogen or other steroids that are aromatized to maximize its anabolic effects.

The ester acetate is released faster and is active for 2-3 days.

Hexhydrobenzyl carbonate is active for 4-5 days.

The ester enanthate is released more slowly and is active for 8-10 days.

Turinabol or dehydrochloromethyltestosterone – a developed oral steroid jumped by East German scientists for their athletes. It currently went out of production in the 80s, in practice, since anti-doping developed detection tests, in fact in the 70s it was still not traceable, hence East German athletes used this compound to a large extent in queglianni will definitely not be disqualified.

This drug is a dianabol derivative, in fact both of them are 17α-alkylated to survive the first-pass metabolism, and therefore both have some hepatotoxicity, however turinadol has activity significantly below androgen at the ratio of A: 50: 0.

The chemical difference between these two steroids is the addition of chlorine at position 4. Turinabol ( https://steroide24.com/shop/orale-steroide/turinabol ) pareche does not aromatize or convert to DHT, which is why it has low androgenicity. Among the side effects reported is the fibrinolytic capacity of this substance, which leads to an increase in blood clotting time with possible consequences such as bleeding and nosebleeds.

It should be added that although turinabol is one of the lowest androgenic steroids and despite not being converted to DHT, there is a documented case (Froehner) of testicular cancer caused by the use of this steroid that speaks volumes about the dangers of most androgenic hormones!

Secret East German studies are circulating on the Internet to demonstrate the effectiveness of Turinabol in athletes. It was not possible to verify its authenticity, however, below is a graph that demonstrates how the use of turinabol improves an athlete’s weight performance when exposed to the aforementioned drug over a 4-year Olympic cycle.

The dosage used by athletes is assumed to be. This substance is active for approximately 16 hours and is monitored for 6 weeks.