7 signs of steroid use 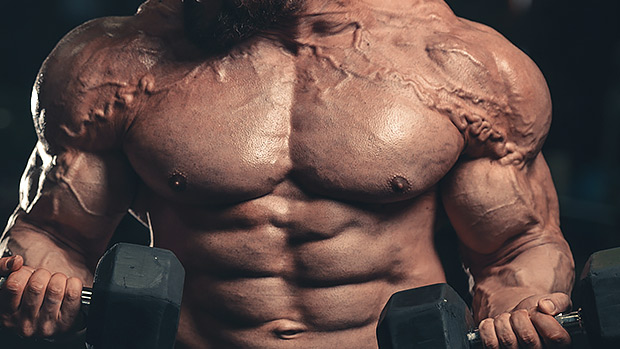 7 signs of steroid use

A couple of warnings

Before I begin my exposé session, I want to make an important disclaimer.

Firstly, there are real genetic monsters on our planet. A person can be extremely strong and muscular, even though they really haven’t touched steroids. But most everyday people and even jocks will call him a “chemist”. By the way, even I do not really like being called a “chemist” (Christian himself honestly said that he used steroids to prepare for two bodybuilding competitions – note Zojnik). You should remember that a program/diet of a superbodied athlete would still be unsuitable for mere mortals.

The first warning sign is when someone is always and everywhere pouting about what a “straight straight guy” he is. Even if no one asks. If you’re really straight and you’re asked about it, why not answer? But some people, for some reason, are always eager to reveal themselves. It’s not evidence, of course, but it makes you think. Especially when such a person starts selling training programs after he or she has been in the gym for just a couple of years (or months).

The rate of muscle building is limited by natural physiology. Of course there are exceptions: about 86% of people gain muscle mass at normal speed, 13.6% a little faster, 2.1% even faster, and 0.1% fantastically fast.

So if someone easily builds ten kilos of pure muscle in a few months – it’s an extremely suspicious sign.

“Chemists are distinguished by huge trapezius muscles and delts that stand out from the rest of the musculature. One theory is that trapezius and the rest of the muscles around the neck have more androgen receptors, making them more sensitive to steroids [1]. I couldn’t find any studies on the deltoids, but maybe they do too.

Another theory is that deltoids are involved in almost all upper body exercises and get much more stimulus for growth than any other group. But in a straight man, they just don’t have time to recover, and a ‘chemist’ is helped by ‘chemistry’.

A fat neck is, in my opinion, the most obvious sign, as delts and trapezoids are often the most favourite muscles of a jock and are powerfully exercised in almost every workout, but the neck is not so much exercised.

Physiology limits not only how fast you can hypertrophy, but also what is the ultimate limit of muscle mass you can potentially gain.

This, for example, was written about by Dr Casey Butt, who developed his prognostic formula based on an individual’s height and bone thickness (wrist and ankle circumference). It is, in my experience, quite accurate, although it does not describe genetic upstarts. For example, according to this formula, a 1.68 tall person with average bone thickness has a “desiccated” weight limit (6% fat) of about 80 kg. But I had a fellow student with exactly these parameters – and he didn’t even work out! Just played football and rugby.

You can google whatever formula you like, but I usually go by the following values (at 10% body fat):

If you see someone carrying significantly more muscle, it could be the result of steroid use. Or you are lucky enough to meet a rare genetic exception.

The effects of ‘chemistry’ on the psyche are not a fiction at all. A number of steroids (especially the most androgenic ones) may increase aggression by several mechanisms:

Increased adrenergic activity. Androgenic steroids increase the sensitivity of beta-adrenergic receptors, i.e. the body’s response to adrenaline. At the muscular level, everything is fine: you are stronger, ‘more explosive’, etc. And on the brain level, you become more assertive and aggressive.
Long-term use of anabolic steroids may cause enlargement of the amygdala , which is the brain region active in aggressive behaviour.
Also, chronic ‘courses’ can increase glutamate turnover in the brain. This increased glutamatergic activity may increase aggression, firstly, by increasing the intensity of the emotions experienced (including aggressive emotions) and causing critical mood swings, and secondly, by simply being neurotoxic (poisonous) to the brain.

“Pumping” after a workout is a natural phenomenon, enjoyed by straight guys too. Then circulation is restored and the muscles return to their original size (well, a little bigger if you’re lucky). But “chemists” always look like they’ve just come out of the gym. The fact that their muscles remain partially activated is also the effect of adrenaline. Because steroids heighten the sensitivity of beta-adrenergic receptors in muscle tissue, adrenaline leaves muscle partially activated even at rest.

In addition, ‘chemistry’ increases muscle glycogen and creatine stores; some steroids help retain water by raising sodium and potassium levels. Some of this effect can also be achieved by the straight man, through the use of a specific diet.

In thin people, veins are clearly visible, e.g. on the forearms and sometimes on the calves. But if swollen veins protrude all over the body – especially on the chest, back and delts – it may indicate the use of steroids. They increase blood volume, especially raising the levels of ‘dense’ constituents (red blood cells and blood lipids).

Blood clotting, of course, puts more strain on the cardiovascular system as well as the kidneys. The heart increases in size – a serious risk factor for CVDs. This is one of the reasons why many bodybuilders have regular blood tests.

These include, for example, gynaecomastia (breast enlargement in men) and severe acne (especially on the back and chest). Not all chemists are affected, though.

Of course, these manifestations may be due to other factors: acne from skin problems, and gynecomastia from too high levels of oestrogen.

Also, a number of steroids will accelerate hair loss if you’re genetically predisposed to it. But high levels of natural testosterone can also lead to this.

(Pre-trial) Conclusion
Once you have detected one or two signs, don’t be too quick to accuse the suspect of using illegal drugs. You must realise that they are unequal.

A combination of either of the two strongest traits with any of the others indicates the use of ‘chemistry’. But if none of the first pair are observed, the others should be collected as much as possible.

A ‘chemist’ may not have any of the above signs if low doses of steroids are used.

Many insta-stars, who look like straight athletes, use a little just to add muscle to promote their business.

Also, some athletes who do not train with iron use doping to improve performance and speed up recovery. A cyclist, for example, may use testosterone and growth hormone and weigh no more than 60kg.