Among the latest advances in pharmaceuticals are certainly type 5 phosphodiesterase (5PDE) inhibitors used to treat erectile dysfunction. These substances have brought tremendous success in the market so much that they have filled the chests of the manufacturing industry over the past ten years.

Pfaizer, which pioneered this type of drug, Viagra, has become the most important pharmaceutical company in the world thanks to its sales of the aforementioned drug. The phenomenon of erection occurs due to the relaxation of the smooth muscles of the cavernous bodies of the penis, followed by the expansion of the arteries.

Parallel narrowing of the venous vessels determines the stagnation of blood with subsequent erection. Cavernous smooth muscle relaxation is a nitric oxide (NO) mediated phenomenon that activates the enzyme guanylate cyclase, which catalyzes the conversion of guanosine triphosphate (GTP) to cyclic guanosine monophosphate (cGMP), which stimulates muscle relaxation. , CGMP is cleaved by phosphodiesterase, of which at least six isoenzymes are known. In the corpora cavernosa, the phosphodiesterase involved is phosphodiesterase type 5 (5PDE). 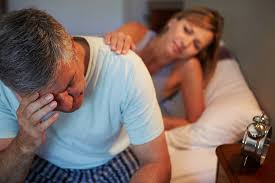 Drugs for the treatment of erectile dysfunction inhibit 5PDE, which causes an increase in blood supply after an increase in cGMP concentration, followed by an improvement in erection. In therapeutic dosages, these substances do not induce an erection in the absence of sexual stimulation.

There are obviously several possible side effects associated with these substances.

In fact, the main risk is that vasodilation can lead to hypotension with possible cardiovascular failure.

It should be added that these effects are certainly exacerbated by the suboptimal state of the cardiovascular system. Among the side effects, it should also be remembered that disorders such as vomiting, diarrhea, dyspepsia, hot flashes, as well as the pressure changes already mentioned, may also be present.

Among the molecules mentioned, the progenitor and the first on the market is Sildenafil (Viagra), after its appearance on the market, two other drugs of the same class were born, namely tadalafil (Cialis) and vardenafil (Levitra).

Of the three compounds, Viagra is the shortest in duration of action (6/8 hours), but more potent, while others have a much longer activity (Cialis over 24 hours), but less intense.

These molecules have recently been shown to be effective in treating another pathology of vascular origin: pulmonary hypertension. This pathology involves severe narrowing of the blood vessels in the lungs, which reduces the ability of the respiratory system to carry oxygen to the body. As a result of the vasodilating action, sildenafil and other substances of this class dilate the artery and other pulmonary vessels, causing a decrease in blood pressure in the lungs and increased oxygen availability. This all makes the lamolecule in question capable of delivering significant benefits in terms of energy release under stress, and the potential benefits for the user result in improved ability to perform aerobic exercise.

Special studies conducted at high altitudes have also demonstrated how sildenafil leads to a significant increase in blood oxygen saturation during physical activity.

In addition, the maximum workload and maximum heart capacity are increased. In practice, sildenafil has been shown to significantly improve physical performance in hypoxic conditions due to altitude.

In light of this discovery, some athletes use sildenafil to improve aerobic performance in long-term sports. There is still little information about the ability of these substances to influence physical activity, however, although not all studies have shown real benefits for athletes in endurance skills, the practice of using 5PDE inhibitors https://steroide24.com/ before performance in sports. stamina is becoming more common.

The vasodilating properties of these substances, especially in the lungs, can improve the ability to oxygenate muscles, which is why more and more endurance athletes are using their products.

To validate this practice among athletes, an Italian study was published in 2014 examining the practice among cyclists. This survey, conducted through an anonymous questionnaire, revealed that in a sample of cyclists, some of them admitted to using Sildenafil before the competition.